It’s a hard realization to come to – that I’m not Superwoman after all.

All these years I thought I was tough. That I could do anything, push through any injury by sheer force of will. Mind over muscle, so to speak.

And then I broke my toe. Not just any toe, but the big toe on my right foot. And not just broke, but BROKE. As in “snapped sideways, busted open, looking like it got caught in a lawnmower, requiring surgery and a pin to set it properly” broken. 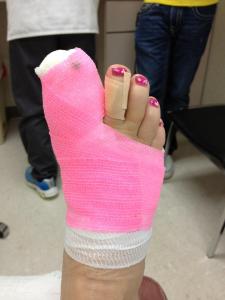 Believe it or not, I didn’t request the pink bandage – the nurse chose it. It’s perfect!

It didn’t really hurt when I broke it, and it didn’t hurt much after the surgery. Superwoman doesn’t feel pain, right? So I didn’t think too much of trying to work out less than 2 weeks after my surgery, even though I was still in a boot with a big bandage protecting the stitch and protruding pin.

I took the boot off and hobbled around a bit. I settled into a kiba dachi to do basics with the class. I even used a yoga mat so my feet wouldn’t slip! I twirled my new bo around; the temptation was just too much for me to pass up. I did maybe half of the 90 minute class. I was a little sore when I finished, but I had a broken toe so I wasn’t surprised.

And then… Then I discovered I’m not Superwoman, and what a disappointment that was! Much to my irritation, the next afternoon my foot and ankle puffed up and the pain kicked in. I spent the weekend on the couch watching movies and drooling from painkillers. Talk about a wake-up call.

It was difficult, but I had to come to terms with a few things:

1) I had a serious injury and I needed to heal before I worked out again.

2) Sometimes mind over muscle fails. That Bible verse, “The spirit is willing, but the body is weak” is sometimes true, whether you like it or not.

3) And the worst realization of all…I’m really NOT Superwoman, darn it!

Honestly, I didn’t like any of those revelations, but there they were and I couldn’t ignore them. I’m not a superhero, and I had to heal. It was back to the sidelines for me. I still attended classes, but instead of working out I watched or helped teach.

Yesterday, almost 5 weeks post-surgery I did another Superwoman check because, of course, I’m still not convinced she doesn’t live in me somewhere. This time I went slower, with the memory of last time’s pain and some monitoring by my instructor to keep me in check. I did a very modified workout. Stretching and crunches, basics in a standing position, a little bit of “tai chi” self defense, and some no-step weapons kata.

Mentally it made me feel like Superwoman. Physically, I didn’t have her power and speed, but I did OK and I made it through today with minimal pain. I’m now lounging on the couch, but this time no drooling, no ice pack, no hydrocodone. I’m calling that a success!

I’ve come to terms with the fact that I’m not Superwoman. Actually, that’s not true — I’m a work in progress. But if I can’t be her, she can be my role model, right? And while I’m waiting for my toe to heal, I’ll do my best to remember that I have to go at Michele’s pace instead of the pace of a lady in a blue leotard and boots. That’s contrary to my personality, so I expect I’ll need several reminders. But if I behave myself and remember who I am, eventually I’ll be back up to speed and acting like I’m the real Superwoman!

3 thoughts on “Realizing I’m Not Superwoman”