It’s the day I’ve been waiting for. Hoping for. Wishing for. And now it’s here. I HAVE A PINK GI!! 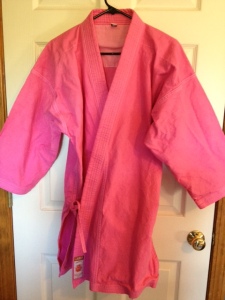 It’s funny how pink gis were the subject of two different conversations Friday. Kyoshi and I were talking about it at lunch, then several karate friends were discussing it on Facebook. It’s Save the Tatas month and pink is on the minds of a lot of people!

I wear a 10 oz. cotton Juka gi that I LOVE. After searching online and not finding a pink gi with equivalent fabric, I popped a couple of Xanax (just kidding) and dyed one of my Juka tops. Not just any Juka top but my newest Juka top that I am still breaking in. Yep, that was a little nerve-wracking I will admit.

I haven’t dyed anything for 25 years, and that wasn’t such a success, so I worried. What if it didn’t dye evenly? What if I got a funky color? What if I ruined my nice, new gi? Oh, the nerves!

I was convinced to try it when Kyoshi pointed out it would be a workout gi and if it didn’t turn out perfectly, it wouldn’t matter. Keeping that in mind, I was less nervous but not completely without butterflies.

I planned a test run on some pants that are ripped beyond repair, but I didn’t want to go through the process twice, so I decided to Suck it Up, Cupcake! and just do it.

I mostly wanted a pink jacket, so I didn’t dye any pants. (Yes, I’ll wear pants. They just won’t be pink.) I have 3 white Juka tops. One is ripped and will fall apart fairly soon (and I will cry, because it is perfectly broken in!), one is my test gi, and one is really new and I’m still trying to break it in. So why choose the newest? Because it was the only one without the association patch, and I wouldn’t have to remove and re-sew the patch. Yep, I’m lazy like that!

I did some research on the Rit Dye website and found a lot of helpful stuff about dying methods, tips, etc. and formed a game plan. I bought a big plastic bucket for the Bucket method, which worked great – except it was too heavy to carry outside by myself to drain the water. That’s what strong college students are for, right?

The Rit Dye website has color combination formulas so you can get whatever shade you want. I chose basic pink, or Fuchsia, as it’s labeled on the bottles. I bought 2 bottles but used about 1 1/2. I also added 1 cup of salt to the mix, as directed, to help set the color. I soaked / stirred for just over 10 minutes. At that point the color was really dark on the gi, but when I washed and dried it the color mellowed. The longer it soaks, the darker the color, I think. Also if I’d used the full 2 bottles I think the color would have been a bit more intense.

Unlike when I cook and bake, I followed all the directions on the bottle. So proud of myself for that!

I followed the washing instructions and washed it twice last night, adding a Color Catcher sheet to see how much dye was coming off the fabric. After two washings I washed the washing machine with detergent, bleach and hot water and added another Color Catcher to see if any dye was left in the washer. I was happy to see it was pretty clean. I washed the top two more times this morning, and it’s still bleeding some color, so I’ll be careful what I wash it with for a while. I may have pink skin tomorrow after class, but I hope not!

I’d say the experience was a success. I love the color and can’t wait to wear it to class tomorrow!