I was leading warm-ups tonight and a girl sorta waved her hands. Her brother, in a disgusted brother voice, asked what she was doing.

“Last time she did a nail check. I did my nails!”

My dream is that one day all the ladies at the dojo will have painted nails. 🙂

I’m off work today in honor of Martin Luther King, Jr. I haven’t been off on MLK Day since I was a kid in school, so kudos to my employer! I’m off work, but it’s been a busy day.

I went to the shooting range first thing to work on my aim. Which isn’t the best, which is why I was at the range. I thought I did OK (meaning I hit the target) but my aim is off and I pull to the left a bit. I sent a photo of my target to a friend who replied, “Was this with a shotgun?” OK, yeah, it does look like a shotgun did the damage!

Next up was the nail salon! I’d trashed my nails more than usual this past week shopping, cleaning the garage and chasing the dog, and my nails needed a total re-do. I certainly hope this isn’t a weekly habit; gel manicures aren’t cheap! But I do love how my nails look when they’re fresh. My nail tech commented, “This is the only girly thing you do, isn’t it? Get your nails done.” Hmmm… Sorta.

After a quick run to the grocery store, I came home to bake cookies. Tomorrow is my baby’s 24th birthday! He loves Oreos, so I baked some Cookies & Cream Cookies for him. (I’ll post that recipe later this week when I’m not shooting, kicking, or baking.) I might have taste-tested the Oreos along the way. And thus ended my domesticity for the day. Happy Birthday to The Pretty One! Cherish your kids – they grow up way too fast.

I’ll be ending my day at the dojo. Tonight is Weapons class, and I’m ready to see what I drop on myself this week. That’s not a joke. I’m such a klutz lately! =D

Well, this is as “girly” as I get. Nails and baking. But I would also argue that the shooting and martial arts are girly too. At least these days they are!

I know very few women (OK, none) who wear their pearls to vacuum and whose big goal of the day is to have the perfect dinner on the table when their breadwinner husband comes home from work. I do know quite a few women who are the breadwinners, who enjoy martial arts as much as a manicure, and shooting a pistol as much as playing in the kitchen.

This afternoon I went out to mow the weeds that have overtaken my lawn, and my thought was, “Hope I don’t break a nail!” I was afraid of catching my nails on the mower or an overgrown tree limb while I was working.

(I abhor yard work and avoid it whenever I can.)

That might sound silly, but if you’ve ever had an acrylic nail pop off unexpectedly, you know how much it hurts. For those of you who have never experienced it, consider yourself lucky. Or smart that you don’t indulge in fake nails. But trust me on this one  — I’ve had it happen a few times, and I can honestly say it hurts more to have a nail rip off than it did to break my nose or my toe! Well, just the big toe. The little toes really hurt when they get broken!

But those breaks are a story for another time. Tonight, I’m just happy I made it through one really “fun” afternoon of mowing and yard work with my polish intact. See? It still looks great!

It’s been pointed out to me that I’ve been a lunatic lately. Not in so many words, of course. The speaker was too tactful for that, but I got the idea. I couldn’t even argue the point, because it’s true.

We’re short-staffed at work, with a workload that has blossomed like a bed of daffodils in spring. The geriatric dog won’t let me sleep through the night. My body is rudely acting its age despite my protests. And my black belt test is less than 2 months away. Yeah, I’m a kook.

I’m taking this weekend to unwind. Not the whole weekend – there’s work to be done. But I’m going to set aside work and worries for a while and pamper myself.

My pampering methods vary from week to week. Sometimes it involves sleeping in, lounging in my jammies all day, reading books and watching the dust collect. But not this weekend. I do need sleep, and I’ve got that scheduled in. But I need more.

I need to cook. Playing in the kitchen relaxes me. As soon as I finished working I made spaghetti for dinner, and I have Banana Chocolate Chip Cookies in the oven as I write this. The cookies are quite good, and they’re relatively healthy as far as cookies go. I’ll take them to the dojo in the morning so I don’t eat them all myself! You can find that recipe on my food blog, Munchies Mind.

I need to go to the dojo. As much as I like to sleep in on Saturday mornings, I need to go to the Brown/Black Belt Class. My Shodan test is fast approaching and I’ll take all the Hanshi Love I can get! Class starts bright and early at 8 am; why it can’t start at 10 am is beyond me. So Miss Morning Person will be up at 6 am for class. It’ll be worth it – it always is.

I need a pedicure. I’m barefoot a good part of the time, both inside the dojo and out. With a casual work environment, I wear flip-flops every chance I get, so my toes are on display. I used to hate getting my feet done, and there are some parts of a pedi I still don’t enjoy. But I have a nail polish fetish that must be fed, and I love the final result – beautifully painted nails that make me smile. The choice for this visit: Louvre Me Louvre Me Not, a shimmery royal purple wonder by OPI. I’m just a little excited.  🙂 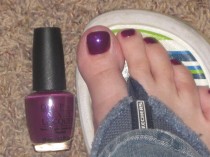 My idea of pampering might sound strange to others, but it really does relax and de-stress me! Cooking, kicking things and getting a pedicure.